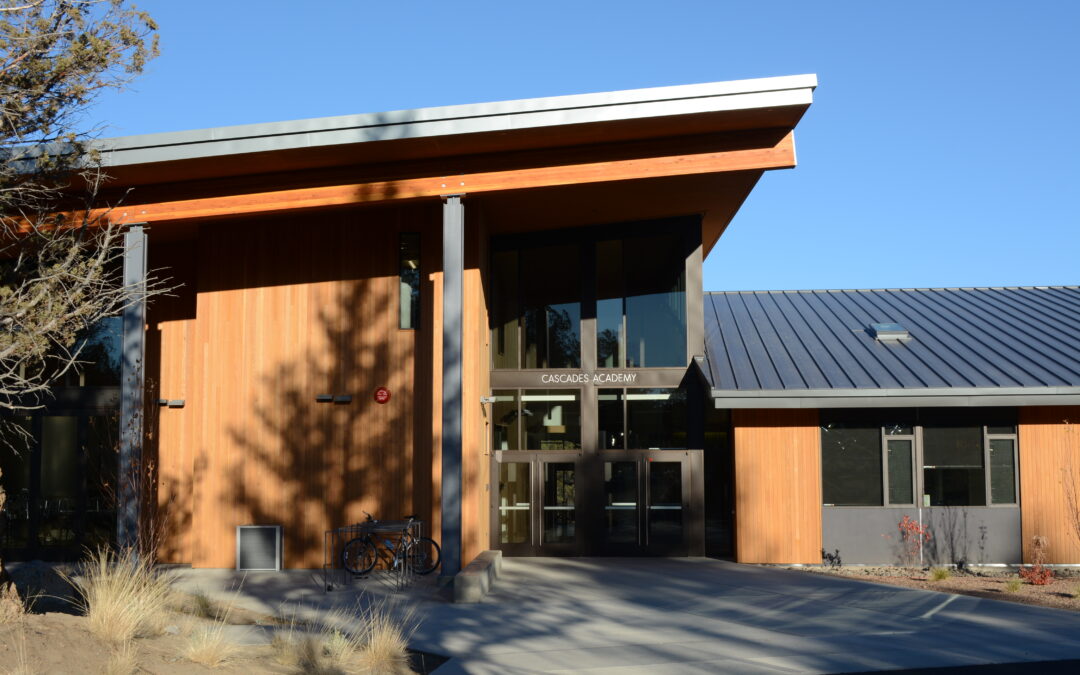 Earlier this fall — just in time for the launch of the new school year — Tumalo quietly welcomed a noteworthy new resident: Cascade Academy. And even if you or someone you know isn’t a candidate for enrollment in the private pre-kindergarten through 12th-grade school, this is one educational institution worth visiting. The design alone is inspiring.
The powers-that-be at the academy (which was based for the past decade in northeast Bend) couldn’t have chosen a more appropriate space: This locale, all but hidden within a parklike 21-acre wooded site on Tumalo Reservoir Road, is adjacent to Tumalo State Park and overlooks the Deschutes River; it’s the ideal setting for a college-preparatory school devoted to integrating experiential learning, outdoor education, arts and service learning.

Funded with more than $6 million in private donations (the school has assumed the rest of the expense as debt), the 39,000-square-foot campus is a study in simple yet dramatic architectural statements.
The splendid $10 million facility, designed by Portland-based Hennebery Eddy Architects and built by Bend’s CS Construction, provides an example of just how seamlessly and attractively function and design can meld together. Composed primarily of a series of prominent intersecting angles, the two-wing facility incorporates natural materials and large expanses of natural light with arresting results.
The outdoors-oriented campus is configured with expansive courtyards located between the two classroom wings to encourage student interaction with the site and provide a protected play area for the youngest children. The facility also includes 17 classrooms, an 11,000-square-foot gymnasium, an athletic field and walking/biking trail, a library and computer lab, an art studio, two science labs, a multi-purpose meeting space, a large common area and additional outdoor learning/gathering spaces.
The facility was also designed to have a minimal impact on the environment, and incorporates a number of green features, including a geo-thermal heating and cooling system (fed via some 4.5 miles of underground piping), electric-car charging stations and drought-tolerant native landscaping.
The new facility, which opened in September with approximately 170 students, was designed to accommodate up to 225 students. That’s more than double the capacity of the previous school. When it debuted in 2003, Cascade Academy taught approximately 60 students at its location on Studio Road in Bend. Before moving to Tumalo, it was nearing capacity.
If you’d like to take a closer look at the new Cascades Academy, the school is holding an Open House at the new campus on Thursday (Oct. 24), from 4:30-6:30 p.m. (please RSVP to rsvp@cascadesacademy.org).
Meanwhile, here are a few photos of the campus to give you an idea of its scope: