Community Redefined: Connecting (or not) in a Digital World 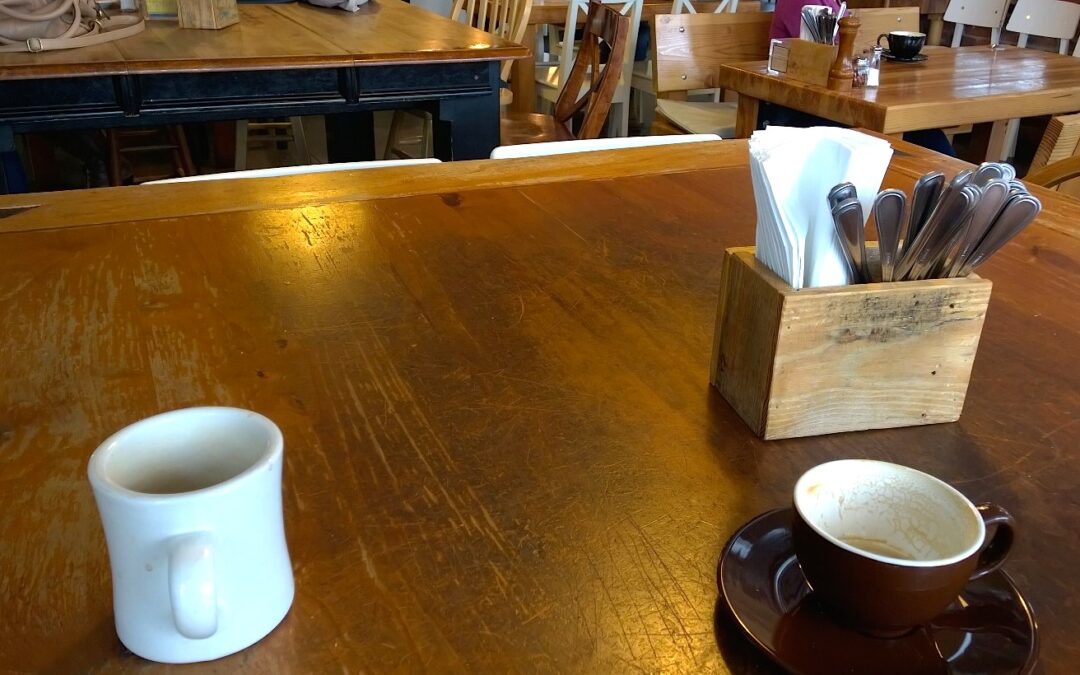 This morning Jack and I splurged on breakfast at one of our favorite Bend haunts, Jackson’s Corner. A harrowing windstorm had blown through Tumalo the previous night and, in addition to wreaking havoc throughout Tumalo, had left us without power.
Before our breakfast arrived, we were sipping our coffee  and counting our blessings (only one tree down, and it fell away from the house) when my eye settled on a young family at the table next to ours. A husband, wife and their young daughter were in the midst of breakfast and yet…they weren’t.
Mom’s eyes were glued to the laptop stationed on the table in front of her (her plateful of eggs and bacon had been relegated to a spot beside her computer, and she took bite after absent-minded bite as her eyes scoured her computer screen). Similarly, Dad’s eyes were glued to the laptop stationed on the table before him (ditto his breakfast plate). Daughter’s eyes were glued to the ballerina she was coloring on the sheet of paper before her (her sliced apple and toast remained untouched — definitely second-fiddle to that increasingly pink ballerina).
Here at Jackson’s Corner — a former neighborhood grocery store located on the edges of downtown and a favorite hangout among locals — the scene seemed a particularly sad commentary. This is, after all, a restaurant founded on a sense of community. First and foremost, Jackson’s Corner is all about the shared experience.
Inevitably, when Jack and I come here, we sit at one of the oversize family-style tables, which we gladly share with other diners. This morning, our tablemates were a friendly 20-something couple whose green eggs and ham were a shared topic of conversation (Jack couldn’t really wrap his mind around the combination of pesto and eggs; he was assured the combo was delicious). After the couple left — waving goodbye as they headed for the door — Jack struck up another conversation, this time with our waitress, who hadn’t yet heard about the power outage in Tumalo. They were still chatting amiably when I returned from the ladies room.
The scene was a far cry from the one I’d witnessed nearby, where the trio remained in their own little world throughout their meal. Actually, “worlds” would be more accurate. They muttered nary a peep to each other and seemed quite content to share pretty much nothing.
I can’t imagine anything lonelier.