Curbside at the Sisters Quilt Show

Attending the annual Sisters Outdoor Quilt Show is both a blessing and a curse. On the one hand, it is such an awesome sight — the tiny town lit up as it is with the festive color- blocked blankets draped across so many of the town’s frontier facades.

Where else would you be able to see such a glorious sight? (Truly, I can’t think of anywhere.) Even folks who’ve never stitched so much as a seam — and have no desire to — find themselves oohing and ahhing at the quilts, their faces pressed within inches of a particularly fascinating hand-sewn square of fabric, all the better to appreciate its intimate artistry. 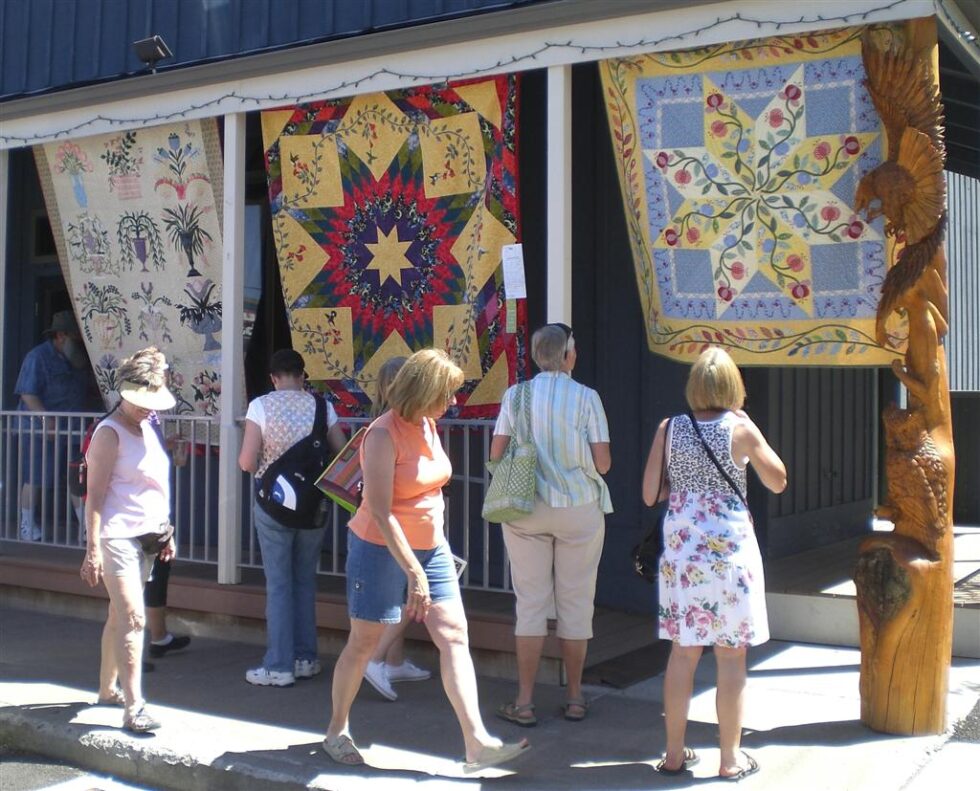 But then there are those crowds. Those pesky can’t-be-avoided-even-if-you-have-no-intention of attending-the-quilt-show crowds that not only stop traffic (Highway 20 was backed up almost five miles when we headed back to Tumalo at about 12:30), but can make navigating even the Quilt Show a challenge. This is not an event for the faint-hearted, especially when temps hit the 90s, as they did this year.

To be honest, I attended this year’s show by accident; I had to reschedule an appointment from Friday,and Saturday morning was my only option. I figured I could get in and out of town fairly painlessly before things got too chaotic. Not a chance. When we arrived at 9:30 a.m., (the offical start time of the one-day show), the town had already been taken over by tourists. With Cascade Avenue closed for the event, downtown was a moving mass of activity, the streets overflowing with folks, young and old alike, groups both large and small (yes, entire busloads arrived periodically), with visitors from as far away as Europe and Japan. (Sometimes we locals forget just how big this show is!). Here are a few photos of the event, just in case you missed it:

indy was a popular draw outside Sisters Coffee Co.

One of countless interviews conducted during the show.

The RE/MAX building was adorned in earth-tone quilts.

This young duo serenaded the crowds outside Clearwater Gallery.

This guy’s got the right idea!