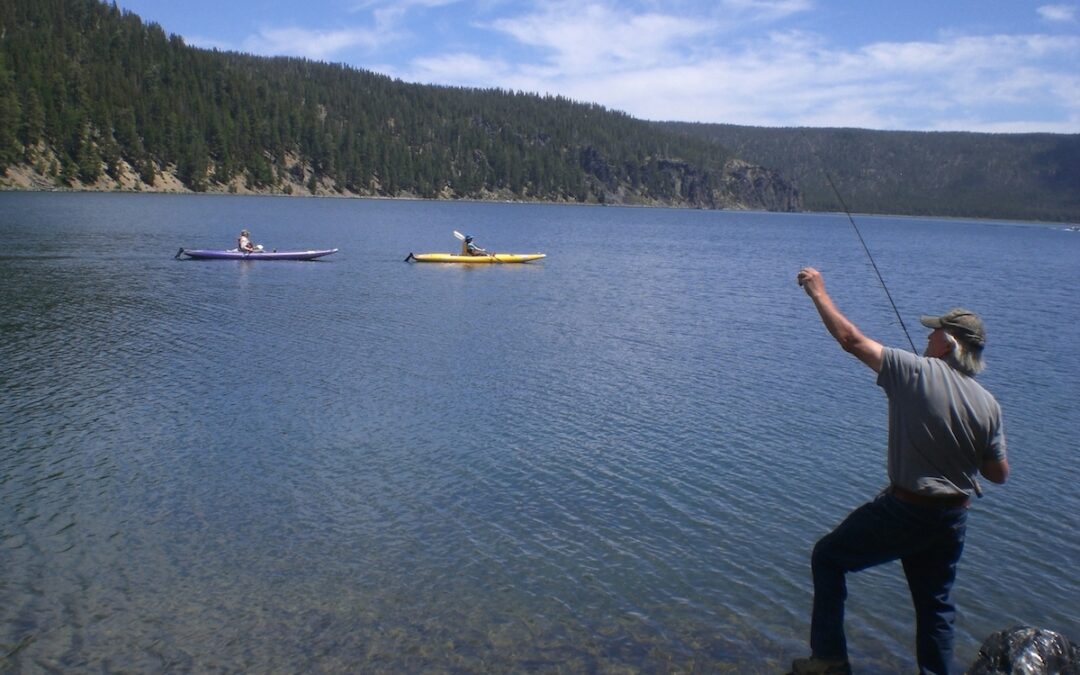 I was looking for a bit of Oregon history; Jack was in search of Kokanee. We found both recently at East Lake. (What’s more, we invited a cadre of Jack’s family to join us on our five-day escape. Sweet!)

Located about 45 minutes southeast of Bend, East Lake is one of several historic spots worth exploring within the fascinating Newberry National Volcanic Monument. The monument’s centerpiece — Newberry Volcano – is the largest volcano in the Cascades volcanic arc and one of the largest shield volcanoes in the lower 48 states. In fact, according to the U.S. Forest Service, it covers an area the size of Rhode Island, extending approximately 75 miles north to south and 27 miles east to west.
Unlike the typical cone-shaped volcano, Newberry formed the shape of a broad shield, created by repeated eruptions over the past 400,000 years. It’s commonly referred to as Newberry Crater; however, the “crater” is actually a caldera (which is formed when the top of a volcano collapses after the magma chamber beneath empties out).
Established in 1990 and operated by the U.S. Forest Service, Newberry National Volcanic Monument spans more than 56,400 acres and encompasses all of the 17-square-mile Newberry caldera, parts of the upper slopes of the volcano and most of the volcano’s “Northwest Rift Zone.” Its summit can be found at Paulina Peak -– which, at an impressive 7,985 feet, offers expansive views of the Cascade Mountains, Newberry Caldera and the High Desert below. Other sightseeing stops within the caldera include the Big Obsidian Flow, Paulina Falls and a number of hiking trails.
The caldera may have originally contained one large lake (like Crater Lake), but more recent eruptions divided the crater into two lakes -– East Lake and Paulina Lake -– which are separated by pumice, ash and lava flows. Both are popular for fishing, boating, swimming and camping.
In fact, the 1,050-acre East Lake is considered one of the finest lake fisheries in Oregon (each year Oregon Fish and Wildlife stocks it with thousands of German brown trout, rainbow trout, Atlantic salmon and Kokanee salmon). Located at 6,381 feet above sea level, it’s approximately a mile in diameter; the average depth is just over 67 feet. The lake is fed by snowmelt and underground springs.

East Lake is a beautiful setting, no doubt –- with its crystal-clear waters and imposing rock cliffs; it’s an idyllic backdrop for the area’s numerous overnighting options. For non-campers, there’s the quaint East Lake Resort (which offers classic log cabins, along with boat rentals and an indoor-outdoor café). There are also two lakeside campgrounds (East Lake and Cinder Cone), plus an RV campground, horse camp and group camp. Nearby Paulina Lake provides several additional lakeside campgrounds.

The lake glistened during an early-morning fishing outing.

During our stay, we hit the lake at dawn, at dusk and at mid-day, and weren’t disappointed -– with either the setting (I snapped many, many scenic photos) or the fishing (we scored plenty of Kokanee and several Rainbow trout).

June marked the beginning of a year-long 25-Year Anniversary Celebration of the designation of Newberry National Volcanic Monument. East Lake Resort will celebrate on Aug. 8 with music, an antique-car show and other family-oriented fun.
Here’s a quick photo tour of our trip:

Bank fishing is a family affair.

Another view of the cliffs.

Yet another cliff view.

View of the lake from atop one of the cliffs.