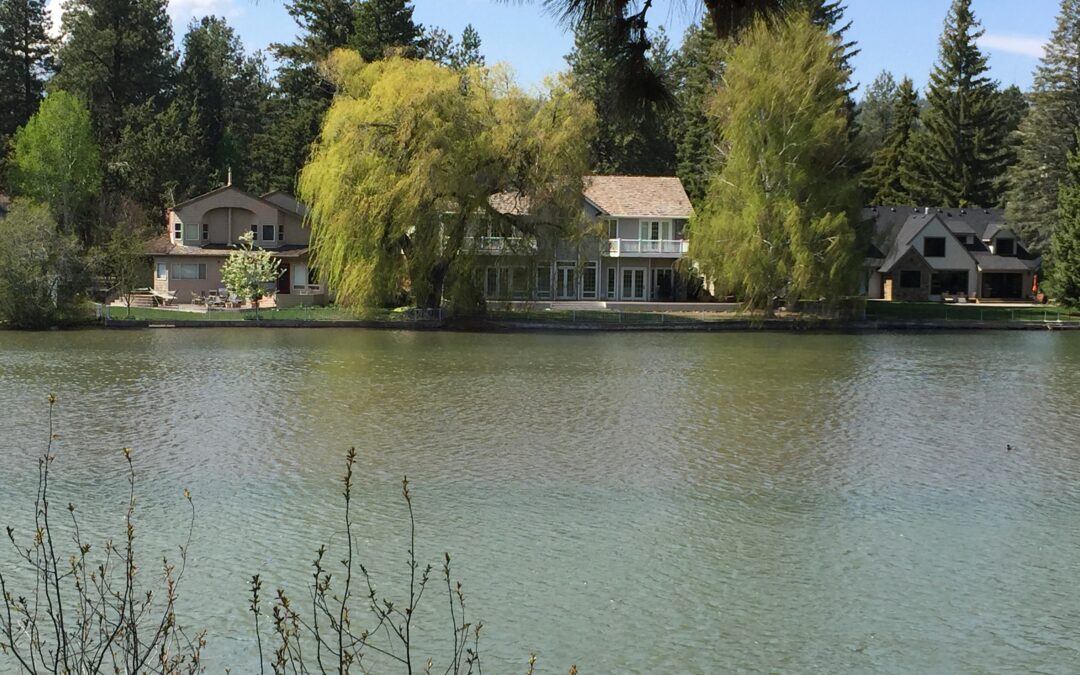 In Central Oregon, a river does run through it — actually, quite a few rivers, which is one reason the area is such a popular destination for outdoors enthusiasts. Although the Deschutes River gets the lion’s share of attention, there are many other popular waterways too, including the Little Deschutes, the Metolius, the Crooked, the Spring and the Fall rivers (to name a few).
Not surprisingly, homes found along our waterways are some of the most highly valued properties to be found here. (In fact, almost half of the 79 current residential waterfront listings in Central Oregon are priced at $600,000 or above).
But along with waterfront properties come flood zones, and flood zones mean flood insurance. Recently, some noteworthy nationwide changes affecting flood insurance went into effect. The federal government is also in the process of gradually phasing out subsidized flood insurance for more than a million Americans with houses in flood zones.
So when First American Title Company’s Bend office offered a class in which Christine Shirley, the NFIP Coordinator for the State of Oregon, provided the local Realtor community with updated flood insurance information, I made sure to attend.
The NFIP, for the uninitiated, is the National Flood Insurance Program. Back in 1968, Congress created the entity to help property owners rebuild and replace their belongings after a flood. Although most standard home-insurance policies cover water damage from bursting pipes and broken faucets, the policies don’t protect a homeowner when any source of surface water runs into the house; it’s simply too high a risk (did you know that flooding is a component of 90 percent of our nation’s disasters?).
A federal program, the NFIP is managed by the Federal Emergency Management Administration (FEMA) and has three components: providing flood insurance; improving floodplain management; and developing maps of flood hazard zones (you’ve perhaps heard of the 100-year-flood map? That’s the NFIP).
However, FEMA doesn’t sell flood insurance directly. The agency works with private insurance companies, which sell coverage to their customers. The government sets the rates, which don’t change from company to company or agent to agent. The cost depends on a variety of factors. Flood insurance is only available to communities that participate in the NFIP.
And as I learned last week, the NFIP is in trouble (thank you very much, hurricanes Katrina and Sandy). It is, gulp, $24 billion in debt. That’s right — twenty-four billion dollars.
Not only that but, at this point, although the NFIP insures nearly $1.5 trillion in property, it’s is only able to pay on the debt’s interest — that’s right, it isn’t paying down the debt at all — and has collected just $4 billion in premiums, according to a Government Accountability Office report.
Ouch. No wonder it’s in the midst of an overhaul.
The latest NFIP changes are a result of the Homeowner Flood Insurance Affordability Act of 2014 (HFiAA), which attempts to address the NFIP problem and clean up the mess created by the Biggert-Waters Flood Insurance Reform Act of 2012. That well-intentioned but ill-conceived Act — prompted by the devastating losses in the wake of hurricanes Katrina and Sandy — implemented certain rates and fees to move away from NFIP’s taxpayer-subsidized rates (which have been in place for years) and created a reserve fund to help cover costs when claims exceed premiums collected by the NFIP. As a result, flood-insurance policies increased by 25 percent across the board for people living in flood zones.
There was, no surprise, a nationwide outcry when Biggert-Waters went into effect, which led to the HFIAA; it mandates that the Biggert-Waters rate hikes be implemented more gradually and that major adjustments in insurance costs be avoided at the time of a property sale.
In addition to rate increases capped at a maximum of 18 percent annually for those with mortgages living in high-risk flood regions, the new legislation means all flood insurance customers nationwide will pay at least a $25 surcharge on their annual premiums. Homeowners with a “secondary residence,” such as vacation properties, will pay a $250 surcharge. That’s in addition to the previously mandated 15 percent reserve-fund assessment that all owners in high-risk flood areas must now pay.
Rate changes will have the greatest effect on properties located within a Special Flood Hazard Area (SFHA) that were constructed before a community adopted its first Flood Insurance Rate Map (FIRM) and have not been elevated.These are known as “Pre-FIRM” properties.
For many communities, the initial FIRM, generated by NFIP and designed to show a community’s base flood elevations, flood zones and floodplain boundaries, was adopted during the 1970s and 1980s. Most of Central Oregon FIRMs were created in the mid- to late-1980s, according to Christine Shirley. There are a few exceptions: La Pine was mapped in 2007, and Redmond hasn’t been mapped.
If your property is located within an SFHA and the home was built or substantially improved on or after the date of that community’s initial FIRM, it should have an elevation certificate, which verifies the elevation of the lowest floor of the house relative to the ground and shows compliance with FEMA’s floodplain management ordinance. To get flood insurance on a Post-FIRM property, you’ll need that certificate.
So, if you’re considering purchasing a property in a high-risk flood zone, find out if the seller has an elevation certificate (it’s transferable). If you’re getting a government-backed mortgage, your lender will require food insurance. When writing an offer, make sure the sale is contingent on the ability to purchase acceptable flood insurance. Provide the seller’s elevation certificate to your insurance agent to ensure that you get a full-risk quote to better understand future insurance costs.
If you’re selling a post-FIRM property in a high-risk flood zone, make sure you have that certificate available for potential buyers.
A few other key points from Christine Shirley:

Final flood food for thought:
The Biggert-Waters Act only reauthorized the NFIP to continue through Sept. 30, 2017. What happens to it beyond that date is unclear. It’s obvious that the program as it is currently structured isn’t working. But, so far, there is no plan for how to make it work.