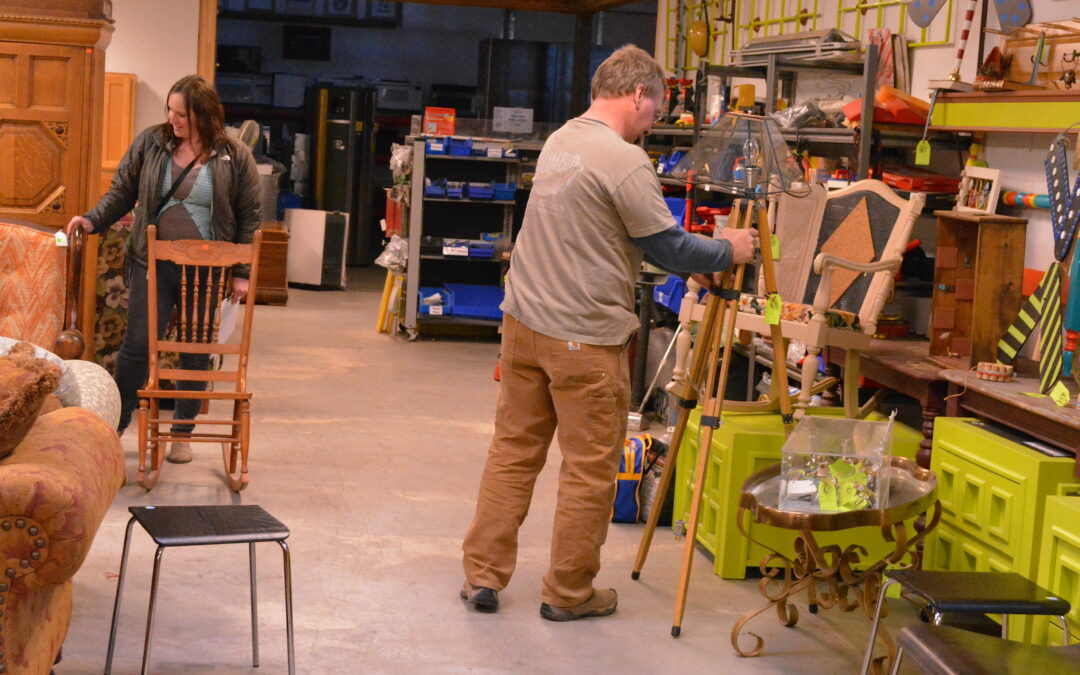 Talk about multi-tasking: Here’s an opportunity for you to see some inventively upcycled home-and-design projects, mingle with the Bend arts community, and support Bend Area Habitat for Humanity, all in one extremely creative setting. Sounds like a winning combo to me.

It’s called the “Furniture Flip Design Challenge,” and it’s a first for the Bend Habitat for Humanity ReStore (Habitat’s nonprofit home-improvement store/donation center, which sells new and gently used furniture, home accessories, building materials, and appliances to the public at greatly reduced prices). The idea — one that’s becoming increasingly popular in the design world — is to take existing furniture, home accessories and/or building materials (the ReStore’s stock-in-trade) and create something new and noteworthy in the process.
With that thought in mind, the folks at the Bend ReStore issued an open invitation back in February to area designers and creative-types to apply for the Challenge, which dared them to concoct three home-design objects that addressed three different themes. The designers would have one month to “flip” their projects, which would then be sold at a public event, with all the proceeds benefiting Bend Area Habitat for Humanity. (For the uninitiated, Bend Area Habitat is dedicated to providing affordable homeownership and home-repair services for low-income families and individuals in Bend and in Crook County.)
The motivation for the fund-raiser came from the unprecedented popularity of the new ReStore (which moved to its current Bend location last December).
Since the new store opened, donations to the ReStore have almost doubled. And while most of the donated goods arrive in good condition, some might need a bit of imagination to ensure that they make their way into new homes instead of ending up at a local landfill.
Enter the Furniture Flip: Imagine the possibilities if a smattering of Central Oregon’s most creative constituents could provide inspiration for the rest of us — no telling how many cast-aside objects could be brought back to life down the road.

Earlier this month, 10 Furniture Flip participants were selected (a combination of individuals and teams). They are Mike Ross and Mallory Queen, Tambi Lane & Jason Whalen, Chris Gorman, Corie Ball and Larry Heath, Jeanne Keith, Lisa Rindfleisch and Julie Story, the Stemach Design Team, Allison Ripley, Ben Hull and Julie Connell, and Sally Ragsdale-Smith and Jeffrey K. Smith.
Shortly after the Flip participants were named, they all gathered together at the Bend ReStore after-hours to go over the ground rules for the Challenge and learn the specifics of the three themes for their Flips.

They were also given a free one-day pass to the cool DIY Cave, Bend’s newest resource for do-it-yourselfers. (DIY Cave’s goal is “to empower people to see their ideas through to a finished product, to allow people to undertake projects which they are capable of but lack the tools or environment needed, and to teach people skills that may not otherwise be feasible without enrolling in a scheduled course….to create an environment in which ideas and expertise can be shared and everything from common problems to imaginative visions can be achieved.” Located at the former Pakit Liquidators site, 444 SE 9th St. in Bend, DIY Cave offers rentable equipment — power tools, grinders, sanders, planers, saws, jointer, wood lathe, hydraulic press, etc. — along with 3,000 square feet of shop space, plus classes and on-site experts to provide guidance when necessary….But I digress.)
Once the Flip themes had been revealed, the designers were given the run of the place (plus $100 of ReStore dollars) to find objects from the store to use in their projects.

The competition guidelines also encouraged the designers to use recycled pieces from other resources of their choosing and allowed them to incorporate up to 20 percent of new materials into their pieces.
Here are the themes for this year’s Furniture Flip:

The designers’ Flipped pieces will be revealed and sold on April 25, from 7-10 p.m at Armature (50 Scott St., Bend) during April’s “Last Saturday” event in the Old Iron Works Art District.
It’s no accident that the date of the show coincides with Earth Day weekend.
After the show, a number of awards will be named, including the “Judges’ Choice” Award, given to the the designer/team who best interpreted all three design themes; the “Trashy to Classy” Award, given to the designer/team whose works exhibited the most-dramatic transformation; and the “People’s Choice” Award (every attendee at the Saturday event will receive a ticket to vote for their favorite overall designer/team). The designers who submit the three individual pieces that best capture the spirit of the themes will also receive awards (one for each category).
To find out more about the Furniture Flip, visit the Furniture Flip website or call the Bend ReStore at 541-312-6709.