HGTV: Coming to a Newsstand Near You 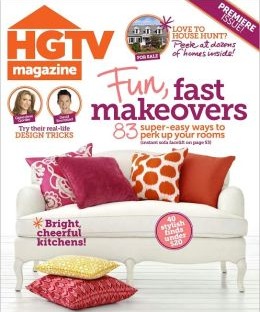 I just watched an HGTV show promoting the network’s new HGTV Magazine. Until I saw the show, I didn’t know HGTV had a new magazine. No doubt that’s the point of this show: to make sure the fledgling venture has as broad an audience as possible when it hits newsstands.
As a former home and design magazine writer and editor, I was a rapt audience. After all, launching a new shelter magazine in this day and age isn’t exactly a no-brainer — the number of home and design magazines has been dwindling for years and includes the demise of a number of once-mighty titles. So for that reason alone, I was curious to see the show: At a time when more and more magazines are biting the dust, does HGTV Magazine have a chance to survive?
I may have gotten my answer even before the end of the show, from one of its participants: Michael Clinton, president/marketing & publishing director for Hearst Magazines. Hearst also publishes the Food Network magazine, which follows the same format: First, establish a popular television “brand,” then produce a print version that captures its essence. According to Clinton, Food Network magazine is the number-one selling food magazine in America
HGTV: The Making of Our Magazine special makes it crystal-clear how the folks behind the magazine think they can attract an audience. Everyone interviewed stresses again and again that HGTV Magazine is different from the existing shelter magazines –- i.e., how the focus is on real people and real environments — and that’s no accident. If the magazine’s editors have a prayer of succeeding with this publication, it will be critical for them to establish a distinction from the get-go.
But that might not be so easy, based on the magazine snippets shared during the hour-long episode — which was also cleverly designed to promote many of HGTV’s new fall shows, including  The High /Low Project, Home By Novogratz and Design Star winner Meg Caswell’s new show, HGTV Great Rooms (which sounds a lot less interesting than Design Crimes,  the idea that Caswell, a former criminologist, pitched),. Despite protestations to the contrary, I didn’t see much that hasn’t already been done elsewhere. I could only shake my head when several editors earnestly discussed how real the subjects of the various photo spreads appear (“Look! There’s actual mud on those boots!”). At least the cover is refreshingly spare.
HGTV Magazine hits newsstands Oct. 4. Do you think you’ll subscribe?