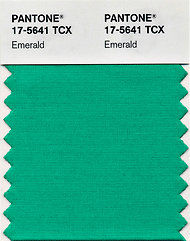 According to a recent New York Times article, emerald green should be all the rage this year. Actually, it was Pantone — the popular color-matching system — that announced that Oz green (aka PANTONE 17-5641) is the color of the year for 2013.
Amazingly, as Times contributor Julie Lasky points out, “Never before, in 14 years of these selections, has a true green been named.” Sure enough, since first announcing a color of the year in 2000, Pantone has paid tribute to (among others) “Blue Iris,” “Chili Pepper,” “Sand Dollar,” “Tiger Lily” and “Mimosa” — but there was nary a green in sight until now. Lasky’s sardonic theory for the glaring omission: “possibly because it is also the color of mold, lobster liver and brussels sprouts.”
The folks at Pantone see things a tad differently: “Symbolically, Emerald brings a sense of clarity, renewal and rejuvenation, which is so important in today’s complex world,” according to Leatrice Eiseman, executive director of the Pantone Color Institute. “This powerful and universally appealing tone translates easily to both fashion and home interiors.”
In case you’re dying to jump on the Emerald bandwagon, here’s a good place to start: JC Penney has partnered with Pantone on a series of Emerald-toned bedding, pillows, bath towels and accessories. They’ll be available at JCP stores and on jcp.com beginning Feb. 1.
Is it mere coincidence that Pantone chose now — as the sustainability movement is gaining momentum — to highlight green? Who knows. But Lasky’s Times article did pair the Pantone announcement with a discussion of another “green” trend: bio-design. Last month saw the publication of a book written by New York-based writer/teacher William Myers, that “focuses on the growing movement to integrate organic processes in the creation of buildings and household objects so that resources are conserved and waste is limited.”
Lasky’s article highlights a handful of the 73 wildly innovative, undeniably odd projects detailed in Bio-Design — including a series of mutating ornamental tiles designed by Seattle-based artist Allison Kudla and a biodegradable concept chair made of mushrooms and cellulose, designed by Brooklyn architect Mitchell Joachim. Now that’s thinking outside the box.