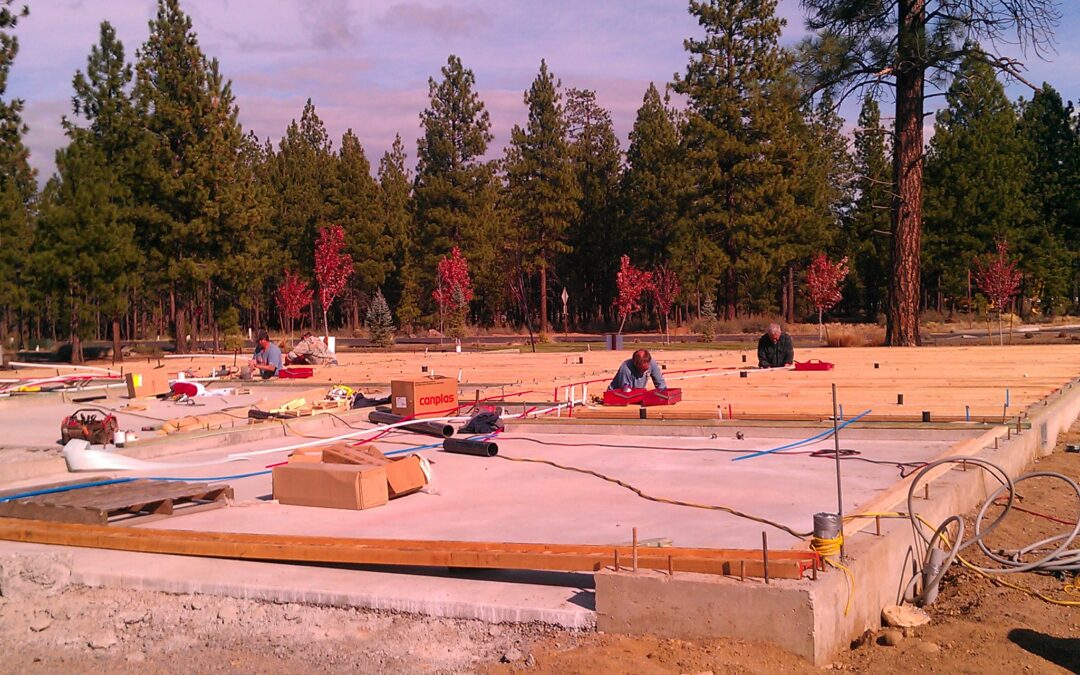 For many folks, buying a home can be a scary endeavor — the massive expense, the confounding closing process, the litany of potential pitfalls. Then there are those home buyers who actually look forward to taking on the additional challenge of working from scratch with a builder to construct a home designed specifically for them.
My clients Bob and Janice are just such folks. I’d like to tell their story as it unfolds, in the hopes that it might demystify the building process a bit for those unfamiliar with how the whole thing works. Who knows; it might inspire you to take the new-construction leap yourself — or confirm your suspicion that you have no desire to ever undertake this particular home-buying experience.

(See a chronological photo essay of Bob and Janice’s home-building process below.)

When I first discussed a potential home purchase in Sisters with Bob and Janice (who currently live in Portland), their thought was to buy an already-built condo or townhome. After talking on the phone several times about their options in Sisters, we met on Aug. 18 to view several newer properties.
Keep in mind, there are only a handful of developments in Sisters that even offer townhomes or condos (the town is a population of 2,000, after all), and we checked out most of them — viewing two townhomes in Timber Creek and three condos in Pine Meadow Village. The only property among those that seemed to capture their attention had just received an accepted offer and was no longer available. (Figures, no?)

For our final stop, we walked through a Hayden Homes townhome in the Village at Cold Springs that was in mid-construction. The rooms had been framed out, but that was about the extent of it. Imagining what to expect from the finished product didn’t seem to be a problem for Bob and Janice. In fact, they were intrigued: Even though the structure we were standing in was not even close to a finished product, we explored that property far longer than any of the others.
Bob and Janice returned to Portland to mull over their options. When next we spoke, the idea to pursue the Hayden townhome purchase had taken shape. Bob and Janice arranged a trip to take a closer look at the materials that would be used in the townhome and to examine a finished Hayden home with a home-owners’ eye. We scheduled a meeting for Sept. 9 with Hayden’s listing broker at a model home in Bend.
There, the listing broker showed us the flooring, carpeting, kitchen, dining, bedroom and bath components that had been pre-selected for the unit that Bob and Janice were considering purchasing. Because the process had not progressed beyond the framing stage, Bob and Janice had the option of changing a number of components if they so desired (for example, they could select hardwood flooring instead of carpeting in the living room, choose a higher grade of carpeting for the stairway and upstairs rooms, select a different type of cabinetry for the kitchen and bath…). This flexibility proved to be a big plus for Bob and Janice.
Their choices, however, were limited to a handful of Hayden options — there was no option to select custom components (at this price point — around $200,000 — and with Hayden’s busy building schedule, that wasn’t possible). Of course, upgrading each revised component would potentially increase the price tag of the home. For example, every additional electrical outlet adds $150 to the final sales price.
We all drove to a newly completed Hayden home with a similar floor plan, so Bob and Janice could examine a new Hayden home more closely. They were pleased enough with what they saw to move forward with writing an offer — with one slight change. Hayden was about to begin work on another three-unit townhome building within the Village at Cold Springs. If Bob and Janice wanted a better view of the mountains, even more flexibility with their material selections and could wait an additional two months or so for a completed home, they could purchase one of those units.
Which is exactly what they did. We submitted an offer the next day, and after a round of negotiations to fine-tune a few details, we received an accepted offer from Hayden on Sept. 16. Tentatively, the home was scheduled to be complete by the end of December.

The next step: Bob and Janice drove over and spent an afternoon making their final selections for their interior materials — everything from a gas line for an outside barbecue, power for an exterior hot tub, kitchen cabinets, lighting and back-splashes to dining-room light fixtures, bathroom drawer pulls and fireplace surround.
In the process, they made a number of alternations. Good thing the listing broker had a nifty software program at hand — it instantly tallied how each addition or upgrade would affect the final price of their home.
In the end, Bob and Janice’s changes increased the townhome’s base price by about $30,000, which meant not only an increase on the final sales price but also an increase in the earnest money they put down on the house. The changes to the sales contract were approved and finalized on Oct. 2.
At that point, we were still waiting for work to begin. Building-code changes in Sisters that would require some design modifications had made it tougher for Hayden to find a framer willing to do the job with a tight turn-around. Another month would go by before we saw much in the way of actual construction.
I stopped by the building site about once a week to check on its progress (or lack thereof). Time seemed to stand still. Finally, on Oct. 17, some framing materials were stacked on site. By the end of the month, framing was underway.
Once the work began, their new home began to take shape. By Nov. 9, the second story was being added. By Nov. 16, the roof was under construction. By Thanksgiving, the roof was well on its way.
I was skeptical on my site trip on Dec. 4: It was mid-afternoon and barely 12 degrees. But kudos to the crew: They were hard at work and the windows were in!
A week later, I had to make a fairly spontaneous trip back East to celebrate my niece’s elopement. When I returned on Dec. 20,  I was pleased to see that the roof had been installed (at last!).  Not without some potential challenges, however. Leaks from a recent round of snow, which arrived before the roof was completed, have left their mark on several spots of the subfloor. We’re not sure how that will be resolved — the builder’s confident the spots will dry without any warping; we’re not so sure… Another minor hiccup: Our closing date has been pushed back from Jan. 10 to Feb. 14. Just as Bob predicted.
Happy New Year! It’s Jan. 3, and the housewrap is on. Lots of other progress has been made during the past few weeks (happy to have those unseasonably warm 50-degree days).  The major plumbing and electrical is in, the fireplace has been installed, the HVAC system framework is in place and the exterior siding has arrived. That water-damaged chunk of subfloor we were worried about has also been removed.
By Jan. 16, the siding was up, doors were on and a crew of guys were installing the drywall.
On Jan. 21, we were notified that Hayden needed to push back the closing date again, this time to Feb. 28. Not welcome news. Meanwhile, Central Oregon weather was being extremely cooperative, with unseasonably warm temperatures once again. On Jan. 25, the high in Sisters was 50 degrees.
By Feb. 1, the drywall was installed and was drying.
On Feb. 6, a major winter storm hit Central Oregon. The previous night, temperatures dipped near zero, and at least six inches of snow were in the forecast. On Feb. 7, I was surprised to see that, even amid an onslaught of snow, members of the construction crew were installing the flooring for the laundry room and bathrooms. The kitchen cabinets were in the process of being installed too.
Feb. 20: We’re in the home stretch (eight days until our scheduled closing) — but there’s still plenty of work to be done. Some of the cabinetry has yet to be installed; the appliances aren’t in, the carpet needs to be installed,  there’s no fencing yet, and although the kitchen and bath tile is in, the grout is missing.
Feb. 26: Just two days till closing — time for the New Homeowner Orientation. Hard to believe that the home is actually ready, given how much was left to do just a week ago. Outside the home is another story — some of the exterior work will have to be completed after closing (weather didn’t cooperate for us on that one). That meant a bit of last-minute negotiating between the Hoffmans’ lender and Hayden. As a result, escrow will be holding back a sum of money (the estimated cost of the work to be done) until the lender has verified that the work is complete. In the meantime, Bob, Janice and I met with Hayden representatives to inspect each room in the house and ensure that everything met with their approval, and to go over how the home’s systems work. There were a few fixes required (some trim to be painted in the kitchen, a few nicks here and there to be painted over, a couple of kitchen cabinets that will have to be replaced) but overall the list was manageable.
Feb. 28: Closing day. I’d been told on the 27th that escrow wouldn’t be able to record the sale until mid-afternoon on the 28th (a slew of closings since it’s the last day of the month), but as it turned out we got the word that the sale was official by 10 a.m. Nice! An hour later, Bob had the keys to their new home in hand. Congratulations, Bob and Janice!
So there we are — for now.  Still not quite done, though. Gotta paint the house and finish the landscaping.

Sept. 16: The home site on the day my clients’ offer was accepted.

Oct. 17: We have building materials!

Dec. 4: Kudos to the crew — it’s barely 12 degrees outside, but they’re still on the job, and the windows are in.

Dec. 20: The roof has been completed — but not before a recent round of snow, which managed to leak onto the subfloor in several spots. Our closing date has been pushed back from Jan. 10 to Feb. 14, 2014.

Jan. 3, 2014: The housewrap is on. Lots of other progress has been made during the past two weeks (happy to have those unseasonably warm 50-degree days).

Jan. 16: The siding is up, doors are on and a crew of guys are in the process of installing the drywall.

Feb. 1: The drywall has been installed and is drying.

Feb. 7: In the midst of a major winter storm, the crew was installing the flooring for the laundry room and bathrooms. The kitchen cabinets were in the process of being installed too.

Feb. 20: We’re in the home stretch (eight days until our scheduled closing) — but there’s still plenty of work to be done.

Feb. 26: Just two days till closing — time for the New Homeowner Orientation. Bob, Janice and I met with Hayden representatives to inspect each room in the house and ensure that everything met with their approval, and to go over how the home’s systems work.