Lessons from a Blind Dog 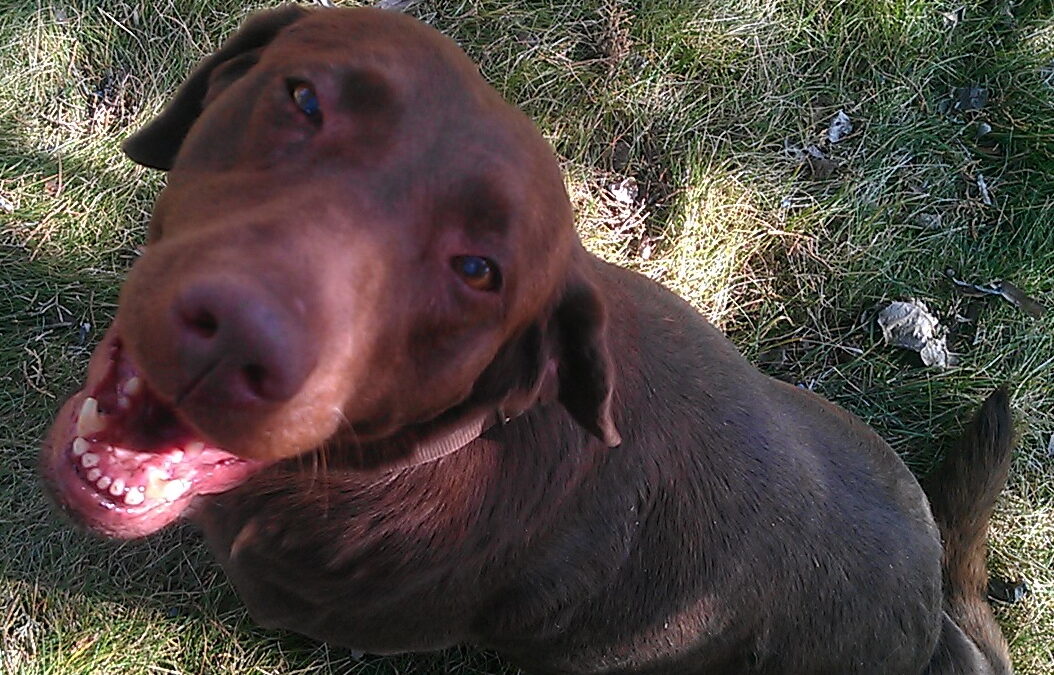 This is Mariah, our supposedly temporarily adopted Chocolate lab. As you can see, she’s a real sweetheart, but she does have her issues. For one, she’s diabetic. Jack’s daughter Sarah rescued her from a breeder who kept her confined to a small outdoor kennel for, I assume, her entire life. Her sole purpose there was to produce puppies, a job that took its toll. By the time Sarah was introduced to her, Mariah was skin and bones (a result, no doubt, of the undiagnosed diabetes). By the time Mariah found herself at our place a few months later, she had gone blind.
Mariah, bless her heart, doesn’t know she’s blind. Neither would you, if you happened to pass us on our morning walk through my rural neighborhood. Of the five of us — Mariah, me, Danny (my Aussie/Border Collie rescue dog), Lucky (my orange rescue cat) and Cowboy (my gray rescue cat — notice a trend here?) —  she’s inevitably the one in front. Barreling full-throttle down the dirt road of our sleepy cul de sac like a woman on a mission. You’d think she had eyes on the side of her head.
Not long ago, she went for a walk — by herself. To do that she had to first navigate the front yard, which is no mean feat, what with two sets of porch stairs, the sidewalk, two rows of bushes, various scattered ornamental rocks (including a few boulders), various clusters of tall grasses and the winding gravel driveway. From there, she had to avoid the fencing, find the front gate (which is typically open), navigate it and then take a hard left to proceed down to the road. If she were to miss the turn and keep walking straight ahead, she’d end up in the neighborhood irrigation ditch. Not a pretty picture.
The walk was an accident, of course. It never occurred to Jack or me that Mariah would venture off on her own. She had been tagging along with Jack while he did his morning horse-related chores. It wasn’t until after he came back into the house that he realized she was gone. I looked out the living room window, scanned the property for any sign of her, and finally spied her ambling down the long shared driveway in front of the house, not far from the main road.
I was immediately terrified for her. What if a car drove by? What if another dog from the neighborhood showed up? What if she got confused and ended up in the ditch? As for Mariah, she was having a grand old time — sniffing the side of the road, her big, broad tail aloft, wagging contentedly as she sidled toward potential oblivion. Happily ensconced in her own world.
Like Mariah (and unlike me), Jack always remains calm, no matter the potential disaster. At my insistence, however, he headed for the front door and released one of his signature blood-curdling whistles. Darned if she didn’t immediately raise her head, turn toward us and trot amiably back toward the house, turning just as she reached our gate. Then, finding the sidewalk without incident, she headed for the house, dead-center, and marched up the stairs and into the front door, as casually as you please.


Turns out, Mariah is also an excellent guard dog. The other day, our next-door neighbors were walking down the road in front of our house. At the time, Mariah was outside with Jack, who was working in the shop, but she took off like a bullet toward the front gate the instant she smelled the neighbors (I assume) — barking for all she was worth at the same time. It’s a pretty intimidating bark, I might add — low, guttural and quite loud.  To the uninitiated, she must have looked rather menacing.
“Will she bite?” our neighbors yelled to Jack, more than a little concerned for their safety.
“Oh, no,” Jack responded casually. “She’s blind and diabetic.”
They looked at him like he was a crazy man.
It isn’t just the neighbors who aren’t quite sure what to think about Mariah. Cowboy, Jack’s wacky character of a cat, has not adjusted well to her presence at all. He can’t figure out why she isn’t intimidated by his ferocious facade.

To the rest of the world, this scrappy bow-legged runt of a barn cat is not to be tangled with. Look at him sideways, and he will rip you a new one. He once faced off with a neighbor’s German Shepherd and won.
Poor Cowboy has no idea that Mariah can’t see him strutting his stuff in front of her. So every time she unintentionally steps on his tail or crashes into him broadside, he stretches tall and swats her face in angry defiance. Mariah, for her part, simply takes the lashing in stride.
Which I guess is the thing that most amazes me. Nothing fazes Mariah. Not the times she collides with a juniper tree or runs face first into the basketball goalpost or misses a step and falls off the deck. With each misstep, I still expect to hear a yelp or see a flinch or to witness some sign of distress. But they never come. They never come.
Because Mariah is, without a doubt, content with her life. Instead of focusing on her limitations, she is adept at adapting to whatever the latest challenge might be. For example, her broad feet have, in a sense, become her eyes. When she’s moving at a fast clip or negotiating stairs, she’ll lift her legs quite high, spread her toes like a duck and reach out as far and wide as she’s able, to deflect whatever objects might be in her path. And then she proceeds ahead — often at a run. When Sarah’s boyfriend Matt saw this clever move in action, he promptly nicknamed Mariah “Paddles.” It is definitely a term of endearment.
These days, it’s easy to focus on the challenges in life. Jack and I, both self-employed, have been hard hit by the economic downturn. Luckily, I’m married to an inherently glass-full kind of guy, which has made traveling this path much more bearable. But even Jack is inspired by Mariah. Who wouldn’t be? She’s fearless. And she loves her life, pure and simple. No complaints. No excuses. No regrets.
She’s the kind of gal I aspire to be.