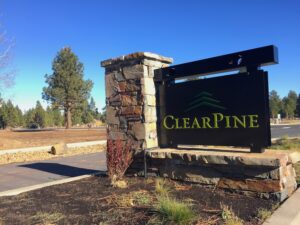 The idea there was to blend numerous home styles and sizes with a range of designs from a stable of hand-picked “select builders.” The goal: shaping a more diverse, more organically designed neighborhood with homes that incorporate quality craftsmanship -– the antithesis of the “cookie-cutter” subdivision. 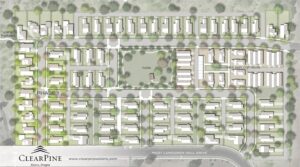 The plan for ClearPine calls for a mix of single-family homes, smaller “cottages” (perhaps geared toward retirees) and townhomes. As of now, there are four approved home styles — Craftsman, Prairie, Mid-century Modern and American Foursquare -– plus three preferred builders and four preferred designers. Although folks who purchase lots aren’t required to use any of the recommended vendors, all site development plans must adhere to ClearPine’s fairly extensive Design Guidelines and CCR’s and must receive written approval from the ClearPine Design Review Board and the City of Sisters Planning Department.

Another key draw of NorthWest Crossing is the broad cross-section of amenities located within the community: schools, churches and businesses, along with numerous parks. That aspect can’t be recreated at ClearPine, although there is promise of a centrally located park (see the rendering of the ClearPine plat map, below). The key amenity: the neighborhood’s close proximity to miles of National Forest (to the west, along Pine Street).

In this summer’s COBA Tour of Homes, the ClearPine model home won four awards: “Best of Show-$400,000-$460,000,” “Best Architectural Design-$400,000-$460,000,” “Best Master Suite-$400,000-$460,000,” and “Green Builder of the Year-$499,000 and Under.”
ClearPine was once home to the Lundgren Mill (the name “ClearPine” pays homage to the knot-free “clear” pine lumber that was milled on this site until the 1960s) and was also previously owned by the Sisters School District. Most recently, it had been zoned “Light Industrial” and was part of the adjacent business park. Since Sisters has experienced a housing shortage for several years now (with no end in sight), developer Peter Hall was able to get the property rezoned for residential use.