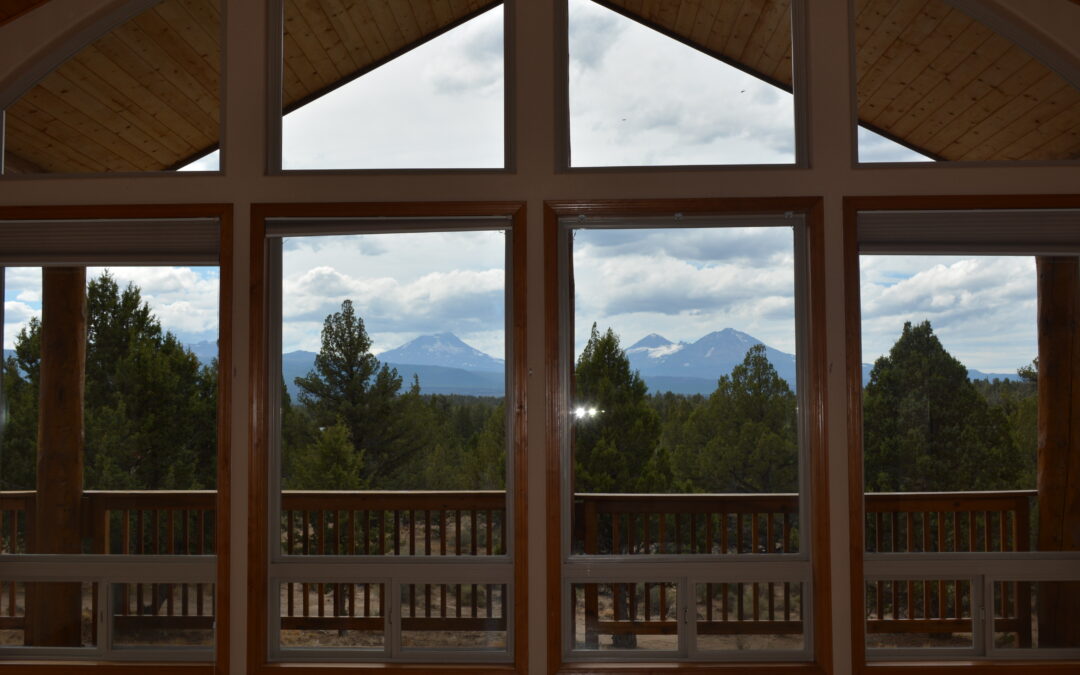 As expected, the Residential real estate market in Sisters saw a seasonal decrease in the number of Active listings on the market in December –- down from 135 in November to 113. It didn’t, however, see a decrease in the number of sales (there were 13 in November as well as December).
The really noteworthy news for the real estate market in Sisters during December was that, like November, the high-end properties saw the most sales activity — by far. In fact, nine of the 13 Closed sales were for more than $450,000. That included two million-dollar Residential With Acreage (RW) sales, plus three Closed and one Pending RW sales above $800,000. Other welcome news: Two of those Closed RW sales were for properties that had been on the market for more than two years.
Here’s a change that isn’t so welcome: The most popular price point for Active RW listings in December was $1,000,000-$1,249,999 (ouch!). There were seven Active listings in that range compared to between one and four in every other category. Perhaps more concerning is that million-dollar listings now comprise 25 percent of the Sisters RW market (which includes Black Butte Ranch properties on more than one acre). That’s an even higher percentage of million-dollar listings than in Tumalo.
Tumalo typically has had the highest concentration of million-dollar listings — at times, as much as 35 percent. It’s now at 20 percent. However, one reason there are fewer million-dollar listings in Tumalo now is that so many have sold this year: 10 (compared to six in Sisters). In 2012, Tumalo had just one million-dollar sale, while Sisters had five.
Overall, the inventory of Active SFR listings in Sisters has now dipped below the preferred six-month mark (indicative of a market balanced equally between buyers and sellers), to 5.25 months. Active RW listings are now approaching that six-month mark, at 6.9 months. Last year at this time, there was an 8.5-month supply of SFR listings, and an eight-month supply of RW listings.
Looking at the Sisters market in December 2013 compared to December 2012 shows few changes –- with almost exactly the same number of Active listings and number of sales. The most significant difference is the median price for Active Single Family Residential (SFR) listings. In December 2012, it was $399,000; by December 2013, it had shot up to $484,000. Consequently, in December 2013, there were just five Active SFR listings below $200,000.
Here are a few December highlights of the Sisters real estate market:
LISTING ACTIVITY
Active Residential Listings in Sisters:  113 56 Single Family Residences; 57
Residential with Acreage)
Contingent Residential Sales in Sisters:  0 (0 SFR, 0 RW)
Pending Residential Sales in Sisters: 5 (3 SFR; 2 RW)
Residential Sales in Sisters: 13 (4 SFR; 9 RW)
Average Days on Market:
193 days for Active SFR listings
192 days for Active RW listings
127 days for the SFR listings sold in December
399 days for the RW listings sold in December
Median Sales Price:
$484,000 for Active SFR listings
$675,000 for Active RW listings
$555,000 for the SFR listings sold in December
$800,000 for the RW listings sold in December
INVENTORY
Single Family Residence:  5.25-month supply (128 sales in the previous 12 months)
Residential with Acreage: 6.9-month supply (98 sales in the previous 12 months)
If you’re interested in studying the market in more depth, below are several charts that capture various aspects of the December Sisters real estate market in detail.