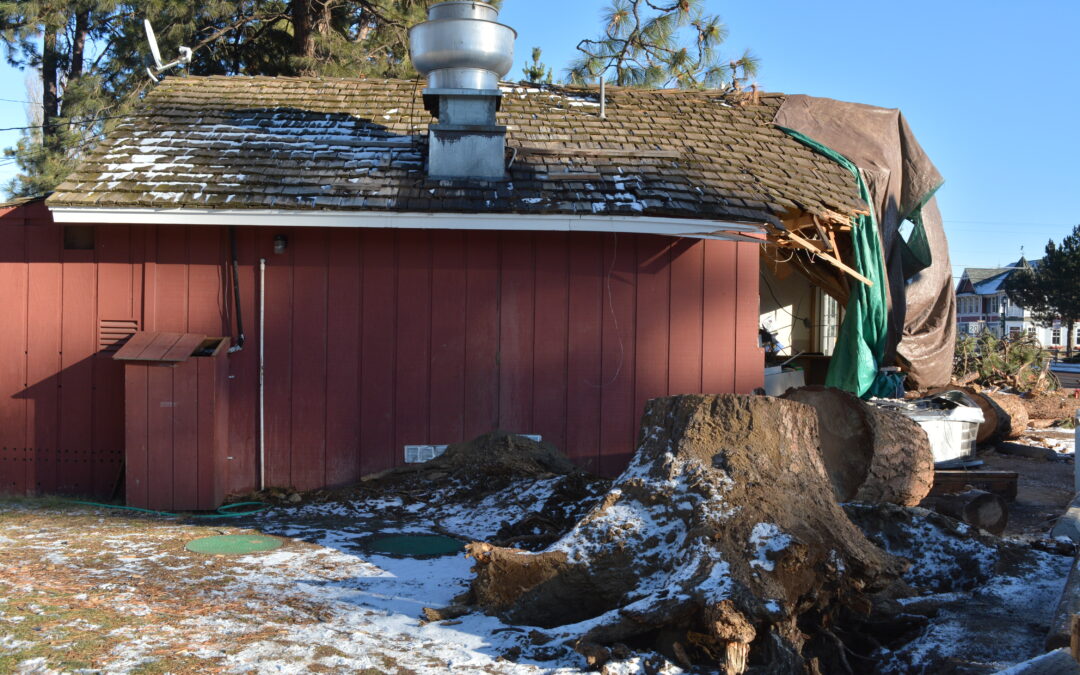 Sisters without the Ski Inn is unimaginable — the downtown breakfast/burger spot has been a fixture in the community for 41 years. But on Dec. 1, a violent wind storm sent a towering ponderosa pine crashing onto –- and into — the restaurant. Thankfully, no one was seriously injured during the collapse. However, at least for the foreseeable future, the Ski Inn is no more.
I, for one, am heartbroken. Jack and I have been regulars at Ski Inn practically since we moved to Central Oregon in 2004.

And I’m hardly alone  — when it comes to Ski Inn’s regulars, we’re still considered newbies. So the loss to the community is immeasurable. Let’s just hope it’s a temporary one.
Over the years, Jack and I have made some fine memories snuggled into the old-school booths at Ski Inn. We’re both breakfast fans, and there was a period where barely a Saturday morning passed that we didn’t stop by –- even if all I ordered was a bowl of oatmeal. It wasn’t so much the food that was the draw for me (although the pancakes are first-rate); it was the small-town sense of camaraderie. Not only do manager Carrie McGonagle and many of the staff here know us by name, but they know Jack well enough to give the consummate prankster a hard time right back.
When I was based at the Sisters’ RE/MAX office, Jack and I would rendez-vous for a quick lunch at Ski Inn on those occasions when his horseshoeing schedule meshed with my office time. It has also been the designated meeting spot of choice for our pre-rodeo parade get-together with friends. And every time Jack’s kids and/or grandkids come to visit, we’ll take a “road trip” to Ski Inn for a mammoth pancake-and-hot-chocolate extravaganza. Jack has even made several friends there -– like many self-employed or retired locals, it was his in-between-appointment coffee-break hangout.
Unfortunately, at least for now, we’ll have to find another Sisters spot to satisfy our Saturday-morning breakfast cravings. I’m not sure what the future holds for Ski Inn, its employees or for the many familiar faces who, like us, have frequented here for so long. These days, rebuilding is never a given.
In the meantime, a fund has been established for Ski Inn’s displaced workers and their families. If you’d like to help out, donations to the Ski Inn Employee Donation Account are being accepted at all branches of Bank of the Cascades. In a fitting show of community spirit, Bank of the Cascades has announced a $2,500 contribution to the fund.
For more info, call 541-549-2061.