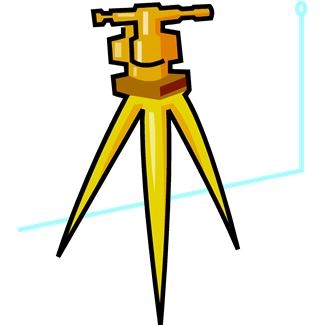 If you’ve ever tried to read a legal description (like the one above), your eyes probably glazed over before you made it halfway through. I know mine do. That doesn’t mean I don’t appreciate the importance of a land survey. In fact, I think it’s probably one of the most overlooked aspects of home-buying.
The tendency for buyers is to do one of two things — especially if they’re buying a home in a subdivision that’s been platted with similarly (if not identically) sized lots: (1.) assume that the established boundaries are accurate; or (2.) ask their real estate agent to point out the boundaries for them.
Neither of these is a particularly wise move. Just refer to the above-mentioned land description: Is it something that an interested party somewhere along the line –- a homeowner, a contractor, a fence-builder, a landscaper –- might have misinterpreted when making improvements to the property? You bet. Is this formula something a novice can calculate on the fly? Not bloody likely. And since I’m not remotely qualified to survey a property, I’m not going to venture a guess based on a stake or two that may or may not be a product of an authoritative recorded survey.
But I am curious about the surveying process and would love to better understand it. So I attended a class yesterday in Bend given by local expert Scott Freshwaters. A surveyor for Deschutes County for 30 years before retiring in 2008, Freshwaters has owned his own Sunriver-based surveying business (Freshwaters Surveying, Inc., since 1987 (541)420-1822 or (541) 593-1792) . He’s also a member of the Professional Land Surveyors Of Oregon.
Here are a few interesting bits of surveying trivia that Freshwaters shared during his hour-long class:

Aside from the fascinating history, what really stuck with me about Freshwaters’ class were several local examples of surveys he has done. These cautionary tales sent shivers down my spine and serve as a stark reminder of how important it is that a homeowner knows the boundaries of his property before he owns it:
Consider the case of the Awbrey Butte homeowner who hired Freshwaters to do a topographical survey because he was planning some extensive hillside landscaping. In the process, he learned that his property line actually went through his living room. (The man was lucky enough to negotiate a lot-line adjustment, at some expense, with his neighbor, who legally could have required him to remove the offending rooms.)
Then there’s the La Pine neighborhood that was developed so haphazardly, it will probably never get straightened out. Apparently, whoever built the fences years ago weren’t all that concerned with following the actual property lines –- fence lines throughout the neighborhood are many, many feet off the mark. His recommendation: Don’t buy there.
And then there’s the rural subdivision east of Bend that has two very different plat plans of the same parcel of land. (Tip: When in doubt, make sure you use the survey that has been recorded with the county clerk. Many times, a plat plan is filed with the surveyor’s office; but only documents recorded with the county clerk are authoritative.
I also learned about a very useful tool I wasn’t aware of: The Deschutes County Survey Research Application. Similar to the county’s DIAL and LAVA property research platforms, it provides a wealth of survey-related information to those who have at least a general understanding of how to read and interpret survey info.
In Conclusion
No, surveys aren’t cheap (they start at about $1,200 and can run several thousand dollars, depending on the size and complexity of the property), but the expense of not having an accurate survey can be infinitely greater. Besides, in many cases, a full survey isn’t necessary; for a minimal investment, a surveyor can identify and mark the corners of a property (the cost for marking corners in a platted subdivision is about $150; homes on acreage typically cost $200-$400).
A worthwhile investment for some valuable peace of mind.