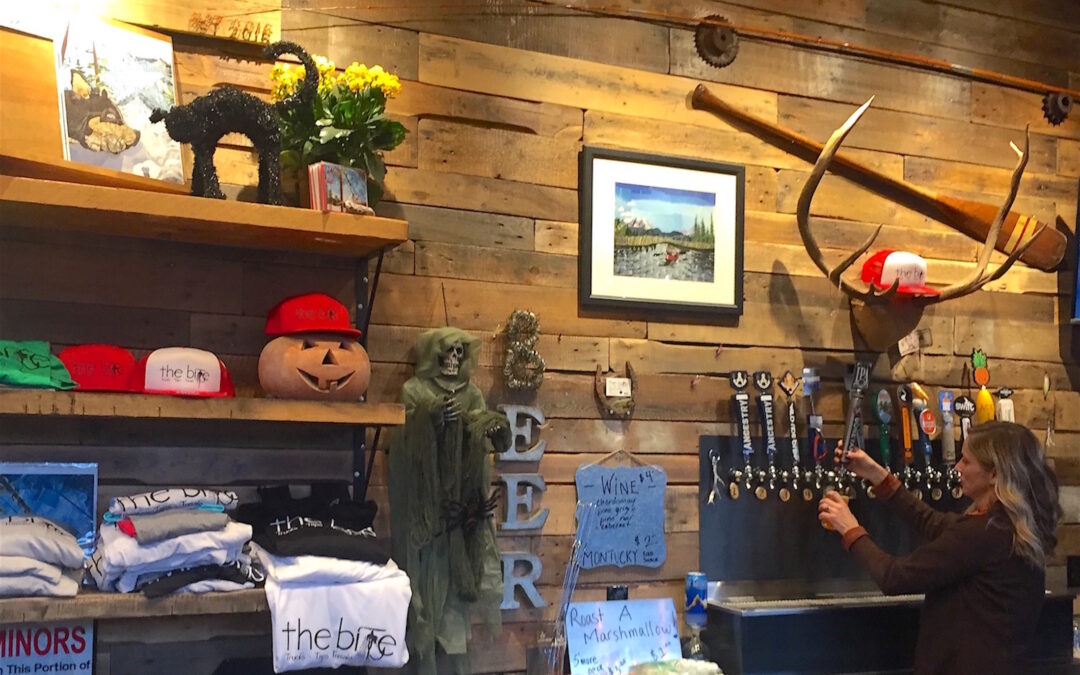 Whatever you call it, the humble meal-on-wheels dining phenomenon continues to be a strong food trend -– even in tiny Tumalo.

It’s hard to believe I wrote about Yolie’s Drive-Up Kitchen, Tumalo’s first food truck, back in 2011 (has it really been that long?). Well, Yolie’s is still going strong, and now it has some company –- quite a bit, in fact, especially for our little hamlet on the Deschutes.

Tumalo’s newest food-truck “experience” is called “The Bite,” and it’s much more than just a place to pick up a burger and go. 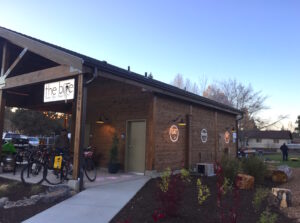 The distinctively designed space (the work of Bend-based Stemach Design and Architecture, who are also responsible for designing one of my favorite local structures, the Bend Habitat ReStore) was envisioned not just as a place to grab a quick bite but as a welcoming neighborhood hangout. So in addition to the food trucks, The Bite boasts a covered -– and heated –- patio pavilion with lots of seating and a nicely stocked bar (plenty of local brews on tap), plus public restrooms and an expansive outdoors space dotted with lawn games, including cornhole, a large-scale Jenga-type tower, an outsize checkerboard, a tightrope (???) and several fire pits. The space is unashamedly kid- and dog-friendly. 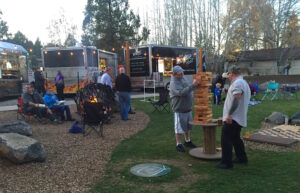 Parlour games and fire pits are two big draws at The Bite. (And check out the guy on the tightrope in the background.)

So far, that formula is working well. Ever since The Bite opened in September, the place has been abuzz with activity every time we drive by (sometimes twice a day). On our visit last Friday evening, the weather wasn’t exactly ideal (a bit brisk) but the place was packed.

Other events are also on tap: For example on Nov. 10, ‘ Art and Wine, Oh My!” is hosting a “Sip and Paint” Party (which combines wine tasting with a painting class and socializing opportunity) at the Bite from 6:30-8:30 pm. 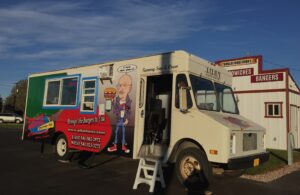 Tumalo Food Court, smaller food-cart pod with two options (Pilot Butte Diner and Bangers & Brews) is located down the street from The Bite.

Yes, if you’ve driven by Tumalo in the past couple of months you’ve probably noticed the Pilot Butte Drive-In food truck cart stationed in the Tumalo Garden Market parking lot; it’s part of another food-cart pod (of sorts) here. It’s called the Tumalo Food Court, and it’s located just a few blocks from The Bite. It’s designed for six or seven trucks, but so far just two trucks have set up: Pilot Butte Diner and Bangers & Brews. This spot is definitely geared toward the drive-up-and-go crowd, with nowhere to sit and/or gather (but it does offer restrooms).

If The Bite and Tumalo Food Court don’t offer enough options to entice diners, Yolie’s is a block away from The Bite in the opposite direction from the Food Court. It’ll be interesting to see if Tumalo is food-cart-crazy enough to support all three endeavors.

Here are a few more photos of The Bite: 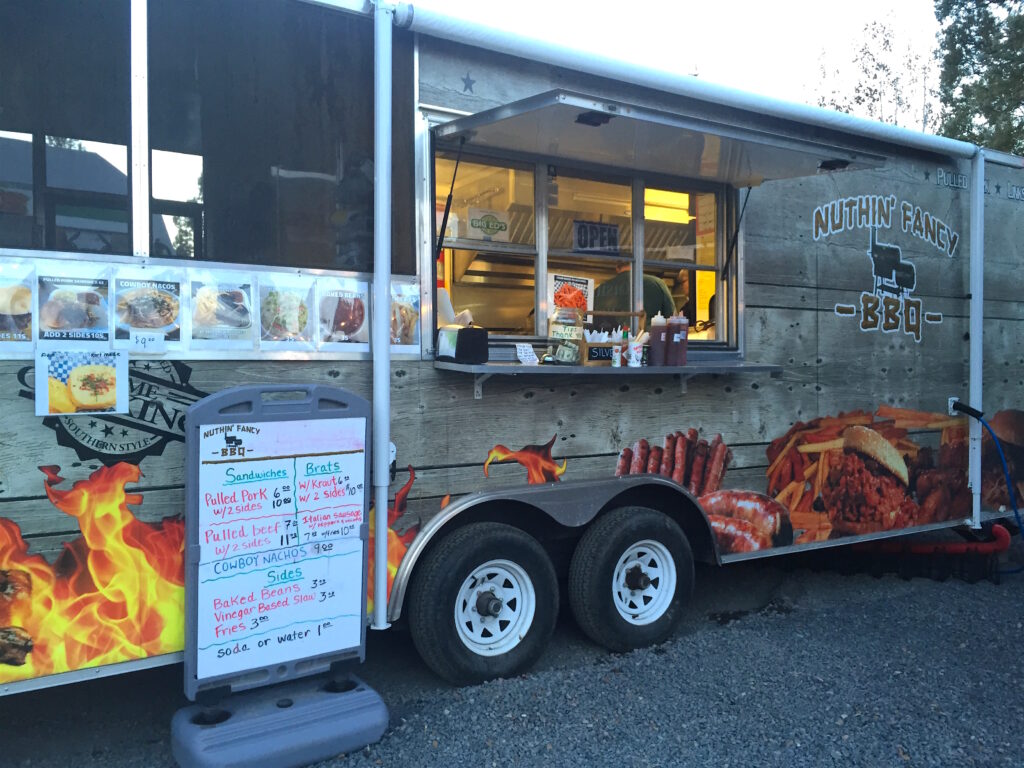 Nuthin’ Fancy BBQ is one of three mobile kitchens. 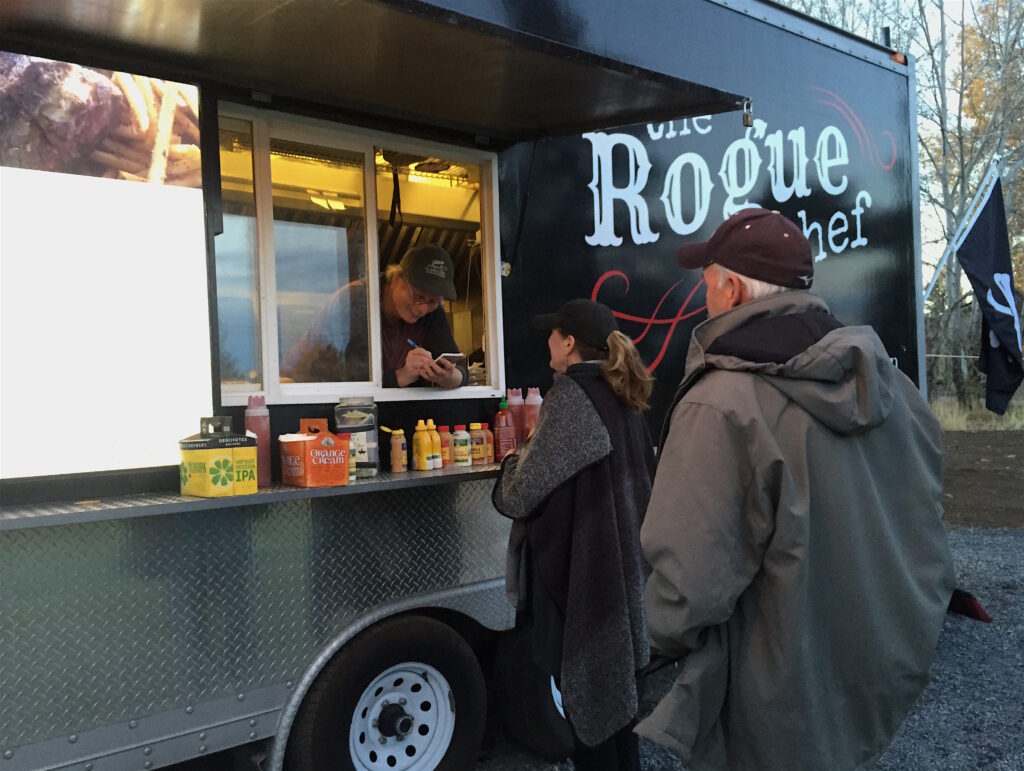 The main draw at the Rogue Chef is its wagu beef burger. 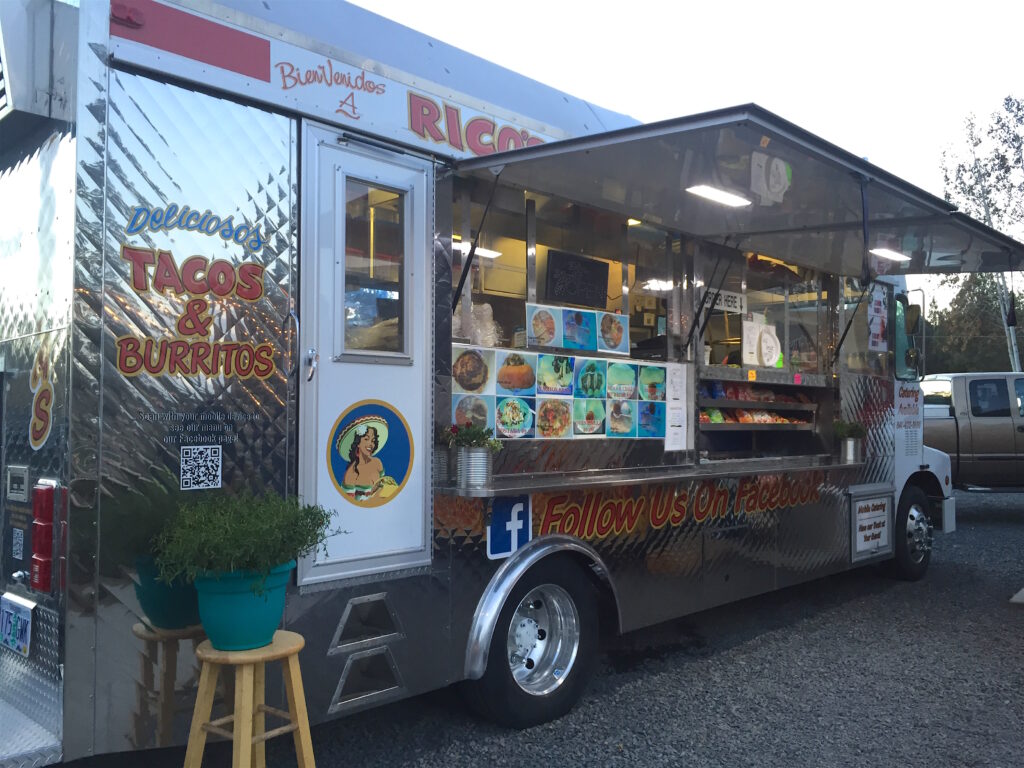 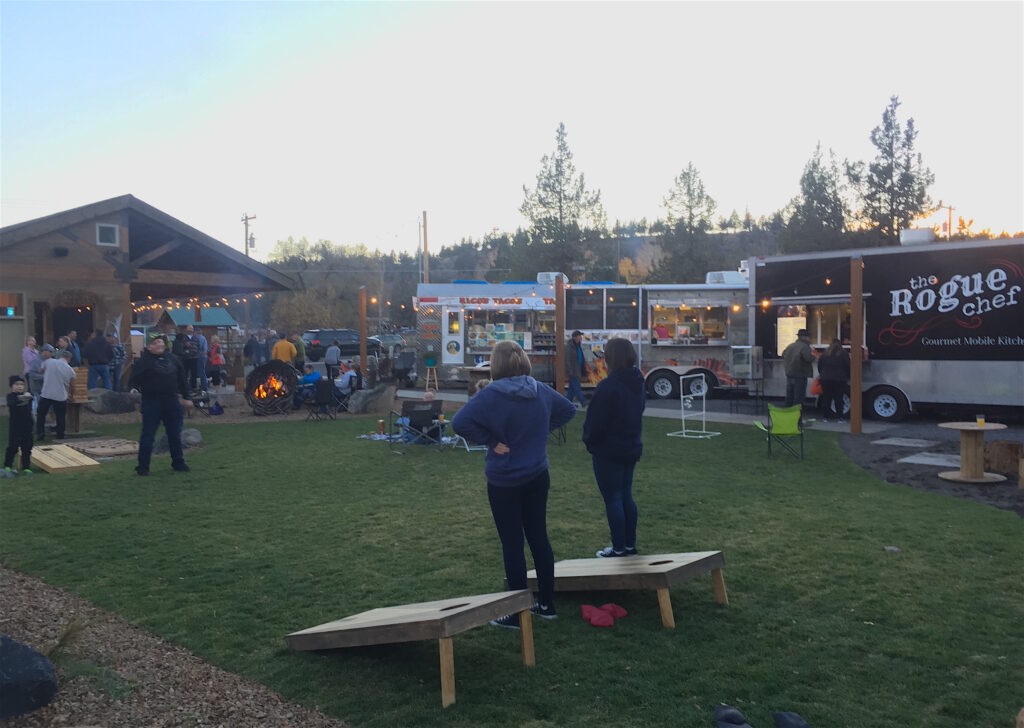 Cornhole is a popular pastime at The Bite. 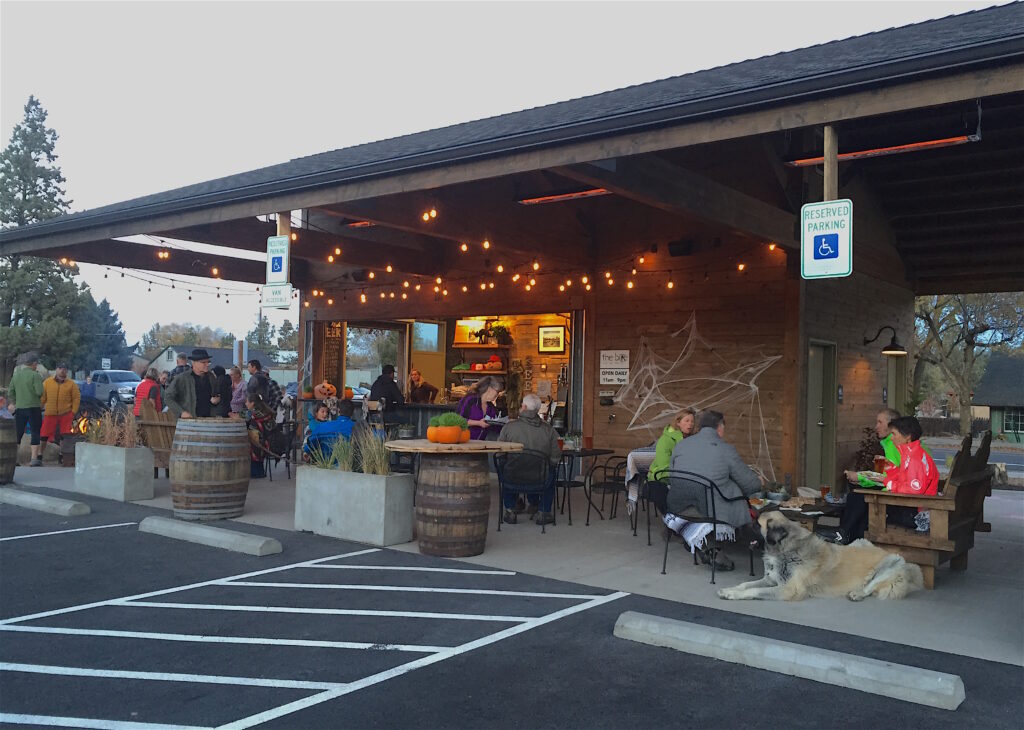 The patio/bar at The Bite is kid- and dog-friendly. 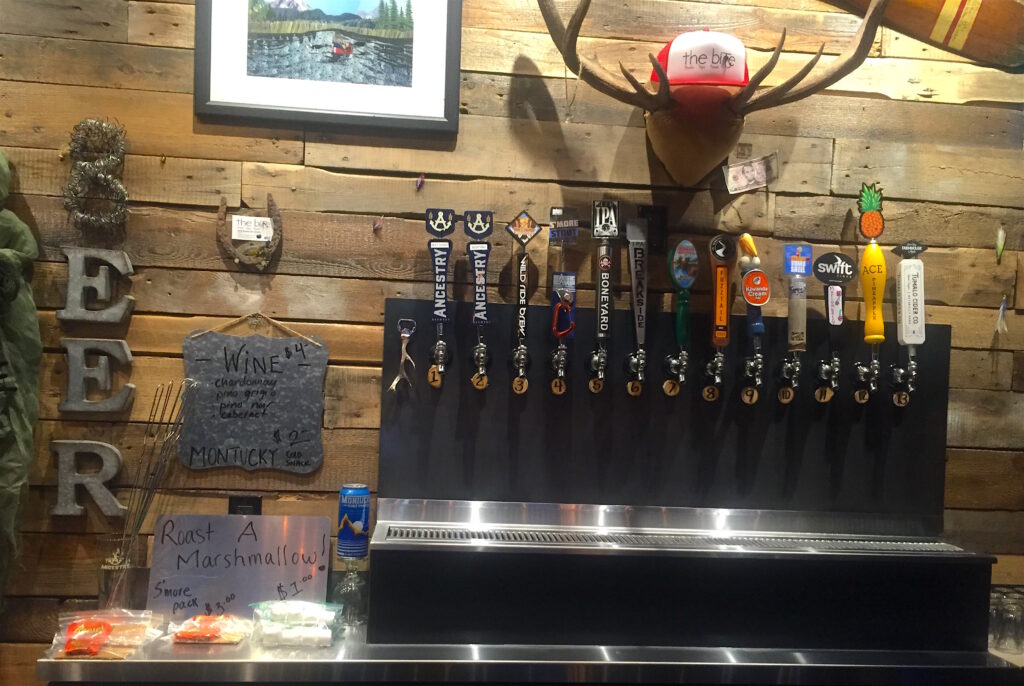