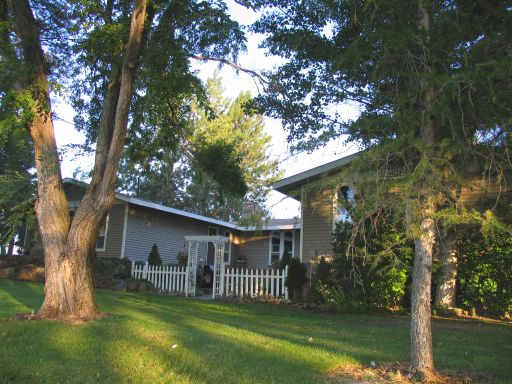 As was the case in March, Tumalo’s Residential With Acreage (RW) real estate market didn’t see the expected increase in inventory; granted, we didn’t see another decrease, either (the number held steady at 39).
What did improve was the number of sales –- up from just two Closed Sales in March to eight Closed sales in April. There were also an impressive 11 Pending sales by the end of the month (up from just seven in March); and included in the sales mix were two million-dollar sales (one Closed and one Pending).
Another shift in April involved the days on market (DOM) for Closed sales, which averaged a massive 311 DOM, thanks in part to two listings that had been on the market for almost two years. Glad to see those listings finally move!
Perhaps the biggest change since this time last year involved the median price for Active listings, which has decreased quite a bit since April 2013: It was $649,900 this month, compared to $712,000 in April 2013.
There’s also been a slight improvement in terms of inventory since April 2013. At that time, there was just a 4.6-month supply of Active listings, compared to a 5.3-month supply in April 2014.
As a horse-property specialist, Tumalo has always been of particular interest to me because that’s where you’ll find many of the most desirable horse properties in Central Oregon. Because its boundaries are up to interpretation, please consider the following statistics a general barometer of the area’s real estate activity that includes most, but not necessarily all, of the listings in Tumalo.
Here are a few highlights of the Tumalo real estate market in April, based on data provided by MLSCO on May 9, 2014:
LISTING ACTIVITY
Active Residential With Acreage Listings in Tumalo:  39
Contingent Residential With Acreage Sales in Tumalo: 1
Pending Residential With Acreage Sales in Tumalo: 11
Residential With Acreage Closed Sales in Tumalo: 8
Average Days on Market: 188 days for Active RW listings
311 days for the RW listings sold in April
Median Sales Price: $649,900 for Active RW listings
$464,500  for the RW listings sold in April
INVENTORY:
Residential with Acreage: 5.3-month supply (89 sales in the previous 12 months)
SALES PRICE:
Least-Expensive Residential with Acreage Active Listing: $100,000
Most-Expensive Residential with Acreage Active Listing: $6,600,000
Price Point with the Most Active Listings: $300,000-$349,999 & $850,000-$899,999  (four listings each)
Listings at $1,000,000 or more: 9